If you can put yourself into the position of asking one of those questions, then you would benefit from Diameter Tape Measures. They are easy to use. They really do the work FOR you. See this short video on how these amazing tapes find the diameter of a round object….without having to cut into it to actually measure the diameter yourself.

People who don’t know they need a pipe diameter tape measure yet:

I have given Lufkin diameter tapes to these 3 groups of people, and told them how to use it. It only take a minute to show them. They are in awe of the tape, and wonder why they never heard of them. My boat repair man broke his, and wanted to buy a replacement tape. That’s how handy these pocket tapes are. They even can be personalized with your corporate logo in full color.

Did you ever wonder how they got the name Mag-Lite®? Was it from the word “magnet”,

“magnificent”, “magnesium”, “magnanimous”? No. Nothing as detailed as that. When it

was invented in 1979, it was named after the owner of the company, Anthony Maglica. He and his company have been on Facebook recently. The topic is his commitment on keeping USA’s flashlight manufacturing jobs in the USA. Yes, that keeps the famous flashlight’s price high, but people are willing to pay for quality. Maglites® are as American as apple pie. People are proud to own one of these magnificent “torches”, especially the new LED models, no matter what the price.

POOR FAMILY: Mr. Maglica was born in NYC during the Great Depression, but was raised in Croatia by his mother.  When he was old enough to escape from the Communist control of Croatia, he came back to America and started manufacturing precision parts for aerospace and the military. He used a lathe that he bought, and was making payments on. In 1974, he incorporated as Mag Instrument, Inc. in California, and went on to invent the Maglite®  flashlight in 1979. Through his hard work and perseverance, he has brought much success to a unique flashlight, his workers, and to his country. 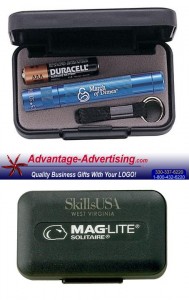 AWARDS: Besides being awarded millions of dollars in patent infringement cases, Mag Instrument, Inc. has been awarded many recognition awards. In 1987, Money Magazine named the Mini Maglite® flashlight one of the 99 Things That Americans Make Best. In 2004, Mens Journal named The Maglite® flashlight in the “List of All Time Best Tools, Toys, and Gear”. In 2005, Mobile PC Magazine named the Maglite® flashlight as one of the 100 greatest gadgets of all time.  In 2010, Maglite XL100 made the “Holiday Hot List” (Dec 2010) – Sunset Magazine. In 2011, Mini Mag-Lite LED made the “Best Car-winterizing tools” list (01/11/11) – Woman’s Day Magazine.

LASER SCIENCE: The laser was invented in the early 1950’s.  Then computerized laser engraving machines evolved in the 70’s and 80’s. The first items to be decorated with laser engraving were wooden plaques. These refined machines are used today to put your logo on engraved Maglites. Laser has enhanced the popularity of promotional Maglights. Today, it is easy to use your vector art file, and quickly engrave your logo on 50 anodized aluminum Maglites. Your imprint shows as the color of the aluminum showing through the places where the anodized color was removed by the laser. Engraved flashlights with your logo are here to stay, because they combine a useful object with a little bit of well-placed advertising.

THE FUTURE: The next step is already here…The ability to put your full-color logo on the curved metal barrel of the Maglite®. This process was started about 2011. The imprint is virtually un-scratchable. The imprint is permanently adhered to the barrel. The color logo on a Maglite® is available in a very limited market.

With all the technological advances in the last 10 years, custom color printing is now available. You can submit your own hi res pictures, and printing companies can print professional wall calendars to impress your friends and customers.

However, there are 3 things for you to consider when shopping for a calendar printer.

Turn your employee frowns into smiles of appreciation. Everyone likes to be

thanked for a job well-done. And thanking them with a gift is a winning combination. One of the most popular corporate gifts is a personalized pocket knife or multi-tool. Knives and tools are:

Need a reason for giving? In a corporate environment, here are the 2 best ways to establish an employee gift program:

The main idea is appreciation award, and the main result is a big smile. Would you spend $20 on an employee to get that kind of effect?

When you order pens with your logo, and intend to pass them out to employees, customers, and trade show visitors, here are some important tactics. You should use these ideas to better promote your company.

Writing instruments now come in a wide variety of colors. Your imprint colors can match the trim on the pens if you want. Your phone number can also be imprinted by itself, on the clip of some BIC pens. You can use your creativity to design a retractable pen or stick pen to reflect the tone of your company. If you need some help, just ask your promotional products distributor for ideas. They have the experience to develop what you are after.

Tips For Promoting Your Business With Personalised Pens: